As we mentioned last week, MOON was shown at the BFI Southbank on 31st August including a Q&A with the groovy MOON chaps.

Although I was unable to attend (hair trouble, and it took ages for GERTY to fix the flowbee) there were plenty of you that DID get to see MOON on the big screen at NFT1 (upgraded from the initial venue of NFT2 due to overwhelming demand for tickets)

Of course, I needed to know how it all went, from you lot in the audience, and those that put it together, and appeared, I thought that would make me feel better, but you all had such a good time…
Laura Adams – Events Programmer – BFI Southbank

We invited Duncan back to BFI Southbank as we included MOON in our ‘Future Human’ season, focusing on sci-fi films that explore the future of the human condition.  We were lucky enough to show MOON as part of the ongoing BFI Southbank preview programme in 2009 (that Q&A here) and realised that Duncan is a fantastic guest, both on-stage and off.

Having the whole team there on 31 August was fantastic and I’ve already had feedback from people to say how useful it was to hear about the independent filmmaking process.

From a personal perspective, I almost jumped into the audience to catch the Lunar Industries patches that Duncan threw out to the crowd, what a great bonus!

BFI Q&A went really well, was good to be reunited with the chaps again as our work’s sort of pulled us apart at the moment. The crowd were really nice and it was really cool to meet all the people that came to talk to us afterwards; one chap even asked me to sign his copy of Cinefex which I was especially thrilled about as when we started Moon we never thought a publication like that would look twice at us!!

There were some lovely illustration students too that seemed to really have their heart in it, and it was really satisfying to give them a few words of encouragement, it’s always a pleasure to chat to the next generation of artists and it’s a bit frustrating that I can’t really dispense much more advice than “Keep going, make sure your work is as good as it possibly can be, know what you want, work to your strengths and get out there and meet people”.

Damon Wise was a great host too and all the BFI crew made us feel really welcome and looked after us. It’s such a great institution and such a prestigious venue it’s always great to be involved with them in any capacity. All in all an excellent night and it means so much to us all that people out there in the world like our little home-grown sci-fi film.

It was a very enjoyable evening and great to see Duncan, Gavin and Barrett and to make new friends.

To have the opportunity to meet fans of the film and to participate in the Q&A at the BFI was an absolute pleasure.

Thanks to all the contributors here and Mr Man Made Movies for keeping us all updated with the film and events surrounding it.

It was great! Good to see the film on the big screen too. But sitting on the front row with DJ right in front of me was rather nice. Lovely t-shirt 🙂

Duncan was great. Even running around and throwing things into the audience. The girl next to me caught one (a cloth badge), he had time for everyone and took ages signing autographs after.

(you can catch the MovieBrit report on the night here, there may even be some video there…) 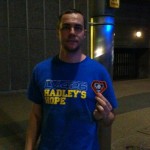 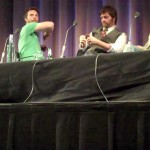 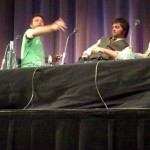 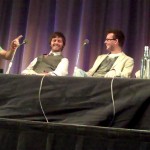 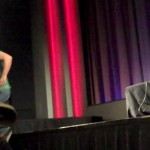 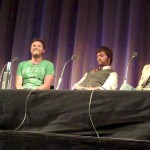 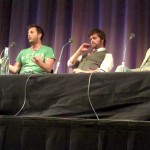 I made it to the Moon screening! All the way from Liverpool, perhaps the furthest traveler?  Didn’t want to miss the opportunity to see Moon on the big screen after missing it at the cinema! I’m glad I did, it was well worth the journey.

Loved the Q&A. Very interesting and funny.  Duncan is very down to earth and a lovely guy 🙂 To top it off the panel launched Lunar Industry badges into the crowd at the end, my wild flailing didn’t land me with one, but it was a very nice gesture.

Overall a brilliant evening and I cant believe I only paid six quid!

Wow! What a great night! Thank you all for making our big BFI evening a lovely time! Ho hum… jet lag and flight back to LA now. Bye!!

It is a most heartening testament to the quality of Moon that Duncan can fill NFT1 for a second time, over a year after release.

great movie session tonight at @BFIwith Moon + q&a with @ManMadeMoon et al. Robbed of an oscar that one.

Saw Moon again & shook @ManMadeMoon ‘s hand! (thanx to my boyfriend♥) I feel the power and I’m going to put it in my graduation film!

Looking forward to seeing Zoe Margolis sew this on a jumpsuit

Look what the director of MOON just gave me. LOOK AT IT. http://twitpic.com/2k1g3m

Zoe’s Lunar Industries patch (in the gallery above) was hand delivered by Duncan after the burning question that we all have “When are we going to see some Lunar Industries merchandise, there are so many people that would like a t-shirt or a shirt..including me” at which point Duncan said “This is for you” launched off the stage and thanked Zoe for the plug 🙂

Sadness at not being able to attend lifted somewhat by how much you all enjoyed the evening, and thanks to all who bought tickets and helped make it such a great event.

If you’re reading this, and were there on the night, please leave your impressions of the evening in the comments below.

We were also very lucky to have the most excellent James Cuff and Ben Mortimer there to record an exclusive interview with Duncan & Gavin, coming soon…